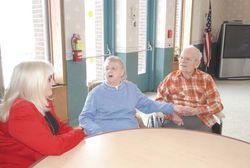 A recent study made headlines when it reported residents of New York, compared to people in other states, are the unhappiest people in the nation.

However, that doesn’t mean people in the state cannot be happy.

Ernest Gagnon, the director of community services for the Fulton County Mental Health Clinic, said while money doesn’t bring happiness, a certain level is necessary. People tend to be unhappy when they cannot meet certain basic needs, such as having a warm house and being able to feed themselves.

Gagnon said relationships – whether they are with friends, family or a romantic relationship with another person – are important to happiness.

While relationships can bring great joy, if things go wrong they also can bring pain.

“We are seeing an increasing number of people coming [here] due to financial stress, which has caused marital stress,” he said.

Gagnon recommends people try and be active to increase their happiness. A satisfying activity tends to make people happier than sitting around, he said.

The study, which compared self-described pleasant feelings with objective measures of good living, found people who described themselves as happy had a reason to feel fine.

The places where people are most likely to report happiness also tend to rate high on studies comparing things like climate, crime rates, air quality and schools.

The happiness ratings were based on a survey of 1.3 million people across the country by the Centers for Disease Control and Prevention. It used data collected over four years that included a question asking people how satisfied they are with their lives.

Economists Andrew J. Oswald of the University of Warwick in England and Stephen Wu of Hamilton College in Clinton, Oneida County, compared the happiness ranking with studies that rated states on a variety of criteria ranging from availability of public land to commuting time to local taxes.

Probably not surprisingly, their report in the journal Science found the happiest people tend to live in the states that do well in quality-of-life studies.

To the Rev. Bonnie Orth, happiness is a state of mind that requires more to achieve than purchasing products advertised in magazines and on TV.

“Happiness is in us,” she said. “We have the ability to change, to be happy.”

Orth, the pastoral care coordinator for Nathan Littauer Hospital and the minister at Mayfield Central Presbyterian Church, said her experiences have shown her happiness often begins with gratitude.

She has visited Central America as part of her work. What has surprised her is seeing how poor people who live in conditions worse than our own can be so happy. She described sitting down to a meal with a group of people who might not normally have a lot of food, but were happy to share with her.

“They were just so grateful that I was there,” Orth said. “It always humbles and amazes me.”

When the survey was released, many people latched on to the fact that residents in sunny, outdoorsy states – such as Louisiana, Florida, Hawaii – described themselves as being happier.

Orth questioned that. She wondered, if sunny weather makes people happy, then why would the state of Washington be at 36 on the list? It has a major city – Seattle – that is justifiably famous for the amount of dreary, rainy weather it gets.

Then there is California, which came in at 46.

Orth said if people want to be happier, they should give something away “with no strings attached.”

Whether it be an item, advice of their time, people can effectively give themselves to others, she said.

“People who are the happiest are those that do for others,” Orth said.

Dorothy Burdick, 81, of Johnstown was at Nathan Littauer Nursing Home on Wednesday visiting her husband Edward, 84.

Dorothy met Ed at the Littauer complex in 1999, when her mother was ill. The two were married a year later.

“Finding the right partner in life,” is how Dorothy described what has made her happiest.

Edward, who said his “best happiness” has been over the last 10 years, said the couple gets along great. Of course, they argue every once in a while.

“No you’re not,” Dorothy said with a laugh.

The state ranking No. 1 in happiness was Louisiana, home of Dixieland music and Cajun/Creole cooking.

Oswald urged a bit of caution in that ranking, however, noting that part of the happiness survey occurred before Hurricane Katrina struck the state, and part of it took place later. Nevertheless, he said, ”We have no explicit reason to think there is a problem” with the ranking.

Rounding out the happy five were Hawaii, Florida, Tennessee and Arizona.

At the other end of the scale, last in happiness – is New York state.

As if to illustrate the reasons for the state’s last place ranking, residents attending a meeting last month in Queensbury unleashed their anger and cynicism at a state government they described as corrupt, self-dealing and too quick to increase taxes. It was a tirade that had one lifelong resident saying he was ready to flee ”this stinkin’ state.”

Oswald suggested the long commutes, congestion and high prices around New York City account for some of the unhappiness.

He said he has been asked if the researchers expected that states like New York and California would do so badly in the happiness ranking.

”I am only a little surprised,” he said. ”Many people think these states would be marvelous places to live in. The problem is that if too many individuals think that way, they move into those states, and the resulting congestion and house prices make it a non-fulfilling prophecy.”

Officials involved in the local tourism industry sounded doubtful the study’s results would have much of an effect on people visiting the area from outside the state.

Deb Auspelmyer, the president of the Montgomery County Chamber of Commerce, said she does not think many people take ranking such as this too seriously.

She noted while N.Y. residents do face more challenging circumstances than some other states – such as higher taxes, colder weather – that breeds a sense of determination in the people here.

Terry Swierzowski, the Fulton County Regional Chamber of Commerce & Industry’s vice president and director of tourism and communications, said she hoped it would not hurt tourism in the area.

“People sometimes overlook the resources available to them in a community, and I’d hope that wouldn’t happen here,” she said.

Information from the Associated Press was used in this story.