Home > 2010 > Press Releases > Camp SuperStarrs is nominated for an Emmy

Camp SuperStarrs is nominated for an Emmy

Representatives from Channel 6 share the news with “campers” recently.

Gloversville, NY…It was not a typical day at Camp SuperStarrs July 28th.. On top of all their camp fun, they also had an Emmy Party. Why? A story about Camp SuperStarrs submitted by CBS 6 News earned an Emmy Nomination this spring. Only five stories received nominations. Wayne McNeil, RRT and camp co-founder, was quick to share the exciting news with Littauer officials. “It was unexpected and exciting news.” He added, “The legacy of Camp SuperStarrs is one that will hopefully continue throughout my lifetime and beyond. The more people who know about it the better.” Sue McNeil, Assistant Director for Camp SuperStarrs stated, “I was breathless at the nomination.”

For 31 years Nathan Littauer Hospital has hosted the camp for children with medical limitations. “Not only do we think you are a superstar, so does the Emmys!” explained Reporter Jerry Gretzinger in a taped message played for the kids at the camp. The “Take a Break” report on Camp SuperStarrs first aired August 6th of 2009 and was among the Emmy nominated entries for the same year in the “Children’s Programming” category. 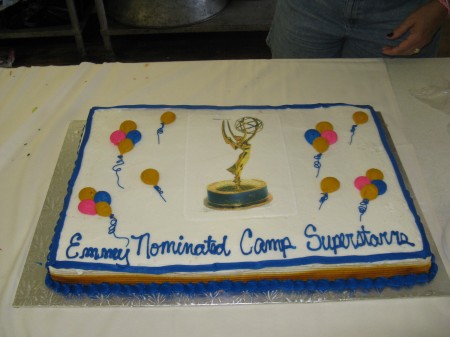 “We wanted to share it with our campers, so we had an Emmy party complete with a cake and song. We also hosted representatives from Channel 6 for the festivities.” said Susan McNeil. Thursday, the children watched the special message from Mr. Gretzinger and enjoyed a cake adorned with an Emmy. “We always knew this was a special place, and now thanks to the fine people at Channel 6, the entire country knows about Camp SuperStarrs” added Sue McNeil. She continued, “We have had a lot of fun saying, ‘We are the Emmy nominated Camp SuperStarrs of Littauer.’”

“The children were very excited Thursday. You could hear a pin drop while they watched their special message from Jerry Gretzinger.” said, Cheryl McGrattan Hospital Spokesperson. The campers made a special stepping stone for Jerry in thanks. “These kids have so many obstacles to overcome it was a pleasure to bring them good news.” said Sue McNeil. 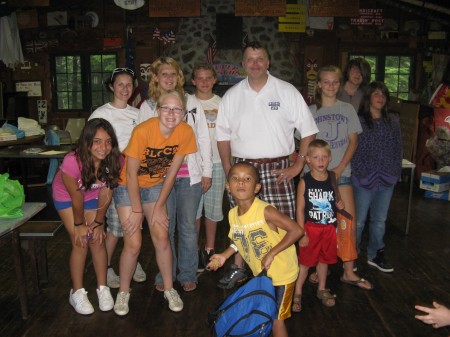 Channel 6 news helps celebrate the Emmy nominations with the campers