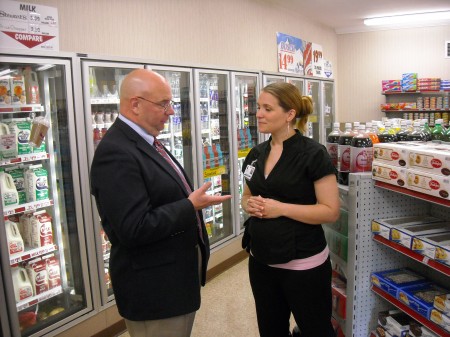 Gloversville, NY…Nathan Littauer Hospital announced today a new program called ‘Healthy Eating on the Run’. With the help of Dietitian, Sandra Baldwin MS, RD. Littauer will launch a series of videos about how to make healthy choices even on the go. The three-part series will be launched on YouTube this week. “We decided to start at Stewart’s, a popular pit-stop when traveling.” said Sandra Baldwin. She continued, “With childhood obesity rates on the rise, I wanted to use a medium like YouTube to deliver that message.” The videos posted on You Tube, show nutritional options one can consider while at Stewart’s Shops.

“It is a realistic approach to eating.” stated Cheryl McGrattan, Public Relations Director for Littauer. “Sandra has a nice way of empowering you – not discouraging you. She understands we are human beings.” Cheryl McGrattan noted, “She even explains how Stewart’s ice-cream can fit into a healthy living lifestyle.”

The hospital worked closely with Stewart’s Shops to produce the series. “When we approached Stewarts with the idea they enthusiastically signed on. With 328 stores they were a perfect partner.” explained Sandra Baldwin. “We are always looking for ways to better serve our customers. Nathan Littauer’s videos will be a good resource for some of our Stewart’s customers to get the most out of their visits to our shops,” said Gary Dake, Stewart’s Shops President.

“I believe awareness is the key to nutrition” states Sandra. According to her, the goal of the series is to empower people to make better choices when on the run. Sandra Baldwin received her Masters of Science in Human Nutrition. She is a Registered Dietitian, and is Certified in Adult Weight Management and Certified in Child/Adolescent Weight Management. “She is uniquely qualified to talk to kids about this topic” explained Ms. McGrattan.

Healthy eating on the run, PART ONE