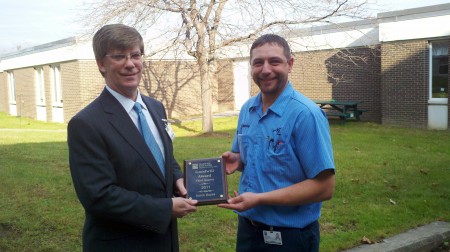 Aaron Hayes is our Employee of the Quarter

Littauer honors Aaron Hayes as Employee of the Quarter

When Hurricane Irene and the related storms came barreling down on our region, Aaron Hayes, an engineer at Nathan Littauer Hospital knew his shift was not going to be a typical shift. And he was right. After working around the clock, he continually addressed leaks, assured patient safety, maintained building integrity and answered internal alarms. And when Nathan Littauer Hospital announced their Employee of the Quarter last week in an organization-wide celebration, his name was called. “This quarter we are recognizing Aaron Hayes.” stated Littauer’s President and CEO, Laurence E. Kelly. Employees gathered for the celebration cheered when they heard is name called.

Mr. Kelly explained, “Our hospital never works better than when we have a real emergency. Aaron was one of the responders to that crisis.” During that crucial time, Nathan Littauer was weathering the storm and receiving patient transfers from another hospital who had to evacuate. Aaron chipped in, took action and did what ever was asked of him. Even more, he did it with a smile.

One of the housekeepers who nominated him wrote, “He worked non-stop, going on the roof, traveling throughout the entire campus, responding to alarms and he never complained- he just kept right on going.”

Aaron is a Mayfield native and has worked at Nathan Littauer for three years. Upon receiving the award Aaron said, “I was very surprised when they called my name.” He added humbly, “I was just doing my job. I did not do anything differently than what any member of the engineering team would do.”

Hospital spokesperson Cheryl McGrattan explained, “Patient care does not end with clinical support. Aaron made sure any leaks were quickly fixed, assured patient safety from any wind and water damage and safe-guarded our equipment,” She added, “Aaron is a fine example of what we do best: people caring for people.” She noted, “Aaron even moved a patient’s car when the patient was discharged during the height of the storm.”

Employee of the Quarter is a function of the Goodwill Committee at Nathan Littauer Hospital and Nursing home. The committee meets to find “someone who displays an attitude and a professional demeanor that captures the ideals of the hospital’s mission.” Employees of the Quarter receive a plaque, preferred parking and a check.

One response to “Aaron Hayes named Employee of the Quarter”