Laughter may be a true rarity; it is contagious and it improves your health. 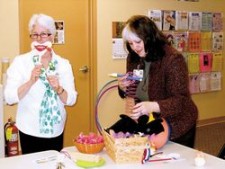 Laughter affects body chemistry similar to the way working out does, she said. Endorphins are released when people laugh, easing pain and improving mood, she said.

As part of her work at HealthLink – the community health and wellness service of Nathan Littauer Hospital – Cridland has incorporated humor into the many programs the service offers. Getting people to laugh together can make it easier for people to communicate and remember what they learn, she said.

Susan McNeil has seen the effect humor can have on people firsthand.

The Director of Volunteers Services at Nathan Littauer Hospital and Nursing Home, McNeil said when programs are put on that include elements to make patients laugh – such as a leash around the neck of an “invisible dog” – they make the volunteers laugh.

Those moments help make people more talkative and relaxed, she said, aiding the communication that is necessary for work to be done and patients to be helped.

The humor does not have to involve incredibly clever punchlines, McNeil said. What is important is people understand a joke, and get it on an emotional level.

“It’s about that connection between the brain and the heart,” McNeil said.

Ochoa said many muscles are involved in laughing, making it almost like a short burst of exercise. Muscles tend to relax after they have been used, explaining why people described feeling more relaxed after spending time laughing.

When it comes to mental health, Ochoa said, laughter not only helps someone’s mood, it also makes it easier for people to cope with difficult things.

Karen Britt, western region program manager for the Alzheimer’s Association of Northeastern N.Y., said laughter engages many parts of the body, including the region of the brain initially affected by Alzheimer’s disease.

Britt said research has shown people who say they are happy live longer and in better health than those who do not.

“In a sad situation, it can be good [for mental health] to laugh through the tears,” she said.

In a way, Britt said, laughter can be the key to happiness. 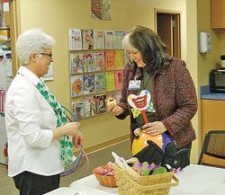 Cridland said humor can be beneficial anywhere and anytime, provided it is appropriate.

“There is no need to insult people to make others laugh,” she said.

McNeil said she has found humor does not have to be crass or vulgar to have an effect on people.

“Good, clean, non-offensive humor is more intelligent and clever than the other extreme,” she said.

Cridland said there are many ways people can make themselves laugh more. An easy way is to make space for laughter, she said, such as having a place at work to put cartoons or jokes.

Attitude can be as important as anything, she said. If people want to laugh more and include more humor in their laugh, Cridland said, they can find a way too.