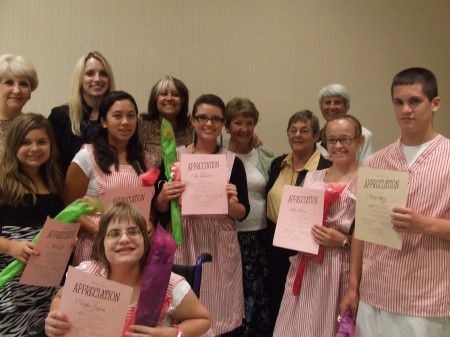 Nathan Littauer Hospital & Nursing celebrated its 35th annual Candystriper/Jr. Volunteer 2011 Awards Ceremony on Monday, September 12. Dana Garguilo, a graduate from Gloversville High School, currently a freshman at Nazareth College, was the recipient of the Alice Paula Muskin Memorial Award. Dana entered the Candystriper program in July,on Monday, September 12. Dana entered the Candystriper program in July, 2007, in 2008 received an Honorable Service award, and has contributed over 325 hours of service in the hospital, nursing home and Camp SuperStarrs. The Alice Paula Muskin Award, established by Mr. & Mrs. Nathan J. Muskin in memory of their daughter, is given each year to a candystriper who demonstrates outstanding service, commitment and leadership. Laurence Kelly, President/CEO, addressed the volunteers stating, “You are shining example to other young men and women with your volunteer spirit. In addition to the residents and patients, the staff also appreciates you giving of your time throughout the summer and some of you, I understand, choose to volunteer throughout the year. Thank you!”

The Auxiliary sponsors the annual event, which was chaired by Mona Capasso. Mrs. Capasso also presented each jr. volunteer with a carnation. The candystripers were treated to a pizza & wings party, and over 40 people attended the awards presentation in the auditorium which included candystripers, their families, hospital board members and auxilians. A special “thank you” cake was served.