Larry Kelly speaks to the crowd gathered about the importance of the Kozy Coat project. Denis Wilson Listens.

Denis Wilson stated “I was moved by the exciting mood of the many Nathan Littauer Hospital & Nursing Home employees present at this event.”

The project called, “Kozy Coats” is an initiative of the hospital’s Courtesy Council and it includes a basket raffle in which all proceeds are donated to Fulmont Community Action Agency, Community Services division. Twenty-six different departments each donated baskets this year. In turn, the proceeds are used to buy outerwear for local children. Last year, their efforts helped to clothe 180 children. 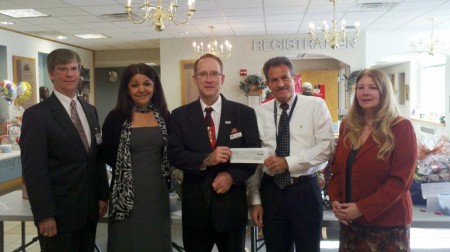 Susan Kiernan, Vice President of Development stated, “It is remarkable. This is entirely an employee led initiative. And their creativity to support our community should be commended.” This year hospital employees also organized a coat donation program, gathering coats from hospital employees and arranging for their cleaning at Robinson Smith. In all, the hospital collected over 100 gently-used coats for local children.

Nathan Littauer’s Kozy Coat project has raised over $35,000 since its inception in 2000. “The numbers are staggering.” said Hospital Spokesperson, Cheryl McGrattan. “The employees are beyond generous, giving large ticket items for the raffle. And they have fun doing it.” As one of the Nathan Littauer organizers Moshgan Jones said, “The proud employees of Nathan Littauer Hospital and Nursing Home have touched and warned so many kids’ hearts in our community.”

Denis Wilson thanked all the employees present for their giving and caring spirit in conducting the raffle once again this year. He stated that “he would like to recognize the fact that this is the 12th year the Courtesy Council has conducted this event which over the years has helped Fulmont to purchase warm outerwear for over 1,000 children in Fulton and Montgomery Counties. The partnership between the Courtesy Council and our agency has proven to be invaluable to the children that we serve every year”.