Believe it or not, practice for high school football teams starts today. 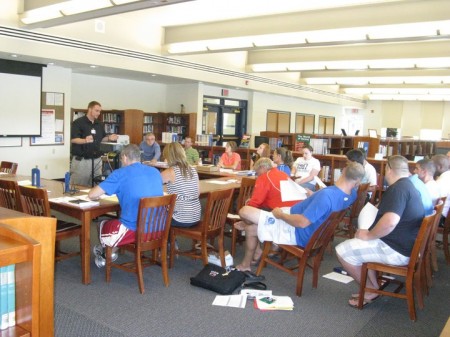 It’s hard to believe the unofficial end to summer for high school athletes is already here as they get a jump start on their school year by preparing for the upcoming sports season.

In reality, though, summer doesn’t officially end until Sept. 23, so the temperatures will still be summerlike for weeks, which is a cause for concern for coaches and athletes, especially football coaches, when it comes to practice routines.

Hot temperatures, combined with the extra weight of helmets and pads, can expedite dehydration, which can be a recipe for a fatal scenario if not monitored.

The National Center for Catastrophic Sport Injury Research’s annual football injuries research reported 13 heat-related deaths among high school and middle school football players since 2006, which is why the Nathan Littauer’s Sports Medicine and Rehabilitation team is stressing the importance of hydration throughout practice by offering a free 45 minute Beat the Heat seminar to area coaches.

“The coaches are educated on the warning signs and how to go about responding to such an emergency,” said Bill Oates, director of Sports Medicine and Rehabilitation at Nathan Littauer, who heads the Beat the Heat program. “It is a growing epidemic across the United States, and we’re just trying to provide as much information as we can.”

The hydration program, which has already been presented at Broadalbin-Perth High School and will be presented at Johnstown High School in September, offers a variety of tips for coaches as they prepare to practice throughout the warm summer days in the rest of August and early September.

Oates said younger athletes are more at risk for dehydration than adults for several reasons.

“Kids really don’t tolerate heat in the same ways as adults do,” he said “Their sweating threshold is higher, so it takes them more to sweat. Their exercise tolerance is shorter, their acclimation to heat is slower, and their core temperature rises faster. Those four things can kind of drastically increase the risk for a young athlete compared to an adult.”

One of the program’s suggestions that’s specifically effective for today as the teams begin to work for the first time after the summer break, is a period of acclimation.

“It’s a 10-day period or so to get them accustomed to the conditioning and accustomed to the heat,” Oates said. “A lot of athletes show up for sports in fairly poor conditions at times. They don’t maintain that level of cardiac fitness throughout the entire year and they also are not accustomed to two-a-days.”

The seminar also touches on who is considered at high risk for dehydration and encouraging coaches to teach their players about signs of dehydration.

Broadalbin-Perth head football coach Jim Pelneau, who is entering his first year with the Patriots, has seen the hydration program run by Oates and Nathan Littauer and already is making preparations to put them into his team’s practice routine.

“You learn to work those things into your practice schedule,” he said. “We are much more aware of it than maybe we have been in the past.”

Heat is obviously a major factor that leads to dehydration, and recently, Section II made recommendations about practices should be run during extreme heat.

Anything over a RealFeel – an index that takes into account temperature and humidity – temperature of 96 degrees will result in a cancelled practice or contest.

When the RealFeel is 91-95 degrees, Section II recommends teams provide water breaks every 15 minutes, and also suggests reducing the practice time. When the RealFeel temperature is above 86, coaches should allow an hour of recovery time for every hour of practice,?Section II?suggests.

Oates said temperatures from 74 to 82 degrees create a high risk for dehydration, while anything over 82 degrees is considered extremely high-risk. He said sometimes more recovery time is needed what Section II suggests.

“You have to take into account the temperature and the intensity of the exercise,” Oates said. “If you do a two-to-three hour practice in 85 degree heat, and you’re really working them, three hours probably isn’t sufficient – especially for young people.”

Fonda-Fultonville head football coach Tom Carpenter said he likes to keep his team from practicing in the heat of the afternoon.

A lot of dehydration incidents occur toward the beginning of the season, when athletes may be vying for a spot on the roster or starting position on the field. There’s a chance young athletes may say they’re OK even when they feel exhausted, Carpenter said.

“You try to tell the kids to be honest with you,” Carpenter said. “If you’re not feeling good, say something.”

William Oates, Director of the Sports Medicine and Rehabilitation services at Littauer.

For information on the Beat the Heat program at Littauer, contact Bill Oates at 773-5540.