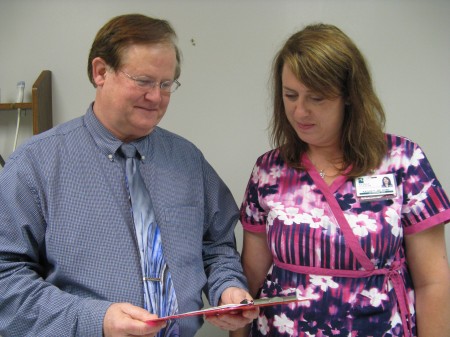 “Nuchal translucency” is a test performed by high-resolution ultrasound early in the first trimester to identify risk factors for Down syndrome, a genetic disorder that affects one in every 733 babies in the United States. “This competency really distinguishes us as a resource to expectant mothers and practitioners in our region” stated Dr. Mike McBiles, Chief of Radiology at Littauer. He added, “Our technologist, Kaylee Palmer who relocated here from Boulder Colorado, studied with the pioneer of prenatal testing, Dr. John C. Hobbins.” Dr. McBiles explained, “Mrs. Palmer was part of the original trial when the technology was first in use. Her expertise makes her an invaluable asset to this area.” He quipped, “It is a bit like having Colonel Sanders cook your chicken in your kitchen.”

Nuchal translucency is a first-trimester risk assessment available at Nathan Littauer Hospital measuring the neck of fetuses between 11 and 14 weeks of gestation. The noninvasive ultrasound procedure can identify genetic abnormalities such as Down syndrome in combination with maternal blood testing. Nuchal translucency measures the amount of fluid behind the neck of the fetus, in an area known as the nuchal fold or nuchal translucency. It is believed that the higher the amount of soft tissue around the neck, the higher the risk for Down syndrome. These tests also screen for two less-common genetic disorders, trisomy 13 (Patau syndrome) and trisomy 18. “We are credentialed, we have completed our tests and we are now testing mothers.” said Barbara Tambasco, Ultrasound Department Manager for Nathan Littauer.

Nathan Littauer Hospital is the first center in the Fulton, Montgomery area to offer the screening techniques “The combination of the nuchal measurement and blood test gives us about a 91% accuracy rate.” stated Dr. McBiles. Dr. McBiles and Dr. Saqib are now credentialed radiologists for the test. In addition, two sonographers at Nathan Littauer Hospital are in the process of earning their certification from the Nuchal Translucency Quality Review Program of the Maternal-Fetal Medicine Foundation. This national education and quality review program was created to ensure the highest levels of accuracy and quality in first-trimester Down syndrome screening.

In 2007 the American Congress of Obstetricians and Gynecologists (ACOG) recommended routine Down syndrome screening and genetic counseling for all pregnant women, regardless of age, before the 20th week of pregnancy. Babies with Down syndrome are born with an extra copy of chromosome number 21, which causes mild to severe delays in physical, cognitive, and language development, as well as health problems such as congenital heart defects, thyroid disease, and digestive disorders. The risk of having a baby with Down syndrome increases with the age of the mother. The risk is one in 365 babies at age 35, one in 100 at age 40, and one in 30 at age 45.

“This test is non-invasive, quick and gives the family vital information.” explained Kaylee Palmer, adding, “Women in this area should be very relieved they do not have to travel to major metropolitan areas to get this test.” Kaylee Palmer has performed thousands of the tests throughout her career. She states, “My goal is to have every patient leave happier than when they came in.” She concluded, “I really enjoy my patients.”