Surrounded in mystery, chefs reveal a few hints for the evening’s menu 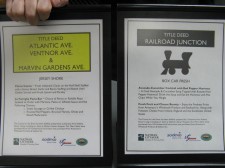 A peek at the menu

Gloversville, NY — Nathan Littauer Foundation is gearing up for the Friday’s May 20th gala, THE EVENT, a yearly soiree to benefit Nathan Littauer Hospital and Nursing Home. Susan Kiernan Vice President of Development and one of THE EVENT organizers explained, “THE EVENT has been all over the world-so-to-speak. We have had evenings in Paris, a journey down the Nile and we have even ‘traveled’ on the Orient Express. But this year partygoers will be treated to something as American as apple pie- Monopoly.” She added, “The theme is generating a lot of enthusiasm.” The Foundation received special permission from Hasbro to use Monopoly as THE EVENT theme. “Hasbro was very supportive of our mission.” said Kelly Colby one of organizers of THE EVENT. 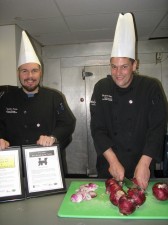 THE EVENT will be held Friday under a tent next to Ruby & Quiri starting at 7:00 pm. Guests will be treated to artwork, décor and food reflecting the game of Monopoly. Kelly Colby explained “Guests will even be able to get close to Pennsylvania Railroad.”

Perhaps the most anticipated part of evening as well as the most closely guarded is the menu. Susan Kiernan said, “People time and time again, rave about the food at THE EVENT.” She added, “I cannot reveal too much about this menu but I can tell you that chefs from across the state have helped to create this Monopoly inspired event.” THE EVENT will feature seven “action food stations”. For example, The Pacific Avenue food station will have Northwest Salmon Cakes with Lemon Pepper Aioli. If you visit the Boardwalk Food Station guests will be treated to Mini Coney Island Hotdogs or a Creole Seafood Tartlet.

“We really stretch our culinary muscles at THE EVENT. And the feedback we get from the guests is extraordinary.” stated Tim Forte one of the chefs for THE EVENT adding, “The culinary team works for months designing a menu which is eclectic and satisfying.” This year, the culinary team is sourcing local foods as well.

Music will be provided by the T. S. Ensemble. “I say it every year.” said Susan Kiernan, “Most of all, this is a great party for a great cause.” THE EVENT is listed on the Capital District Book of Lists as one of the most successful one-day fundraisers in our region. In the previous eight years, THE EVENT has raised almost one million dollars for the hospital. Sue Kiernan notes, “People know that behind all the festivities lies a community hospital who greatly appreciates the support we receive from our community.”

If anyone is interested in getting tickets for Friday’s event, please call 773-5505.