New food program first of its kind for region

Gloversville, NY — Nathan Littauer Hospital and its Nutritional Services has recently launched a new food service program, “Expressly For You, Personal Service Dining by Sodexo™”. After a few months of testing, the system is now fully operational for every patient in the hospital. “This really sets us apart from other healthcare facilities in our region” stated Tim Forte, the General Manager of Nutrition Services for Littauer who also spearheaded the program. He added “Hospital food is the subject of a lot of late-night comedy routines, but our team is working hard to change that image. We have already seen a big difference in our patient’s reaction to our food using the Expressly For You Program.”

Reporters and food critics joined us in a patient room to try our new food service program.

The program is centered on one-on-one attention with a nutritional services staff person, called an Ambassador. Upon arrival to the hospital a patient is provided with a menu while nutritional information is received from the admitting physician into a central computer system. Soon after, the hospital ambassador meets with the patient to review the upcoming meals and their preferences. Then the patient orders from a menu which changes every three weeks. The ambassadors are equipped with a handheld computer and the ordering is done in real-time. As the ambassador orders something bedside, the order is instantly received by the kitchen and preparation begins at once. “This way our food is hotter.” stated Scott Norris, the hospital’s Executive Chef. Designed not to be obtrusive and with a focus on efficiency, each patient sees an Ambassador six times a day. Mr. Norris explains further, “This goes beyond room service- because we provide face-to-face interaction. Instead of picking up the phone to order food each patient gets a person who visits them, who is trained in customer service and eager to help.” 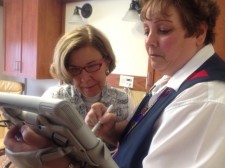 Food critic, Anita Hanaburg works with our Ambassador to order her meal

“Gone are the days of tray lines” stated Mr. Forte. Mr. Forte goes on to state, “Now everything is about real-time.” He also has observed, “Our staff has responded well to the change. Some people who were behind the scenes in our kitchen are now working directly with our patients and enjoying the interaction.”

As a part of Sodexo Healthcare the hospital is the only one in the Upstate New York region using this program.  Tim said, “The project required a complete overhaul of the kitchen at Littauer. It was no easy task.”

The program has been well received by the patients. The hospital reports that patient satisfaction scores in the category of “Courtesy of the person serving the food” has risen by 40 percentile points. One patient who was admitted last week explained, “The food was actually good. I almost hate to leave.”

Tim Forte concluded, “I am really proud to have reached this goal. But in the end it is the patient who will benefit the most.”

2. All of the menu items are approved by Sodexo Healthcare and also approved by the clinical dietitian team at Littauer.

3. The hospital has 96 hours of food on hand on any given day in the event of an emergency.