Nathan Littauer credits their smart technology plan over the last five years for its recent technology accomplishment: a CMS (Centers for Medicare and Medicaid Services) incentive. “This is a major milestone and we are thrilled to be one of the first hospitals in the state to reach this level of electronic competency” stated Laurence E. Kelly, Hospital President and CEO. Nathan Littauer is one of only five hospitals to receive an incentive payment. The NY Medicaid EHR Incentive Payment program funded by the Centers for Medicare and Medicaid Services is designed to help defray the costs of installing and using electronic medical records to track, manage and follow their patients. The program was created by the Health Information Technology for Economic and Clinical Health (HITECH) Act and offers healthcare providers financial incentives for implementing and demonstrating meaningful use of an EHR system. “Littauer started upgrading our medical records system long before this program came into fruition. It is great to know we built a world-class system.” stated Mr. Kelly. Littauer’s electronic health record system meets a certain federal standard to qualify as technologies that have “meaningful use”. Mr. Kelly added, “We are part of a nationwide effort to modernize healthcare information technology because it is efficient and can control healthcare costs. But in the end it is THE PATIENT who benefits the most.”According to a report issued by the federal government on January 5, 2012 only 5 hospitals in New York have received the monies. “To our knowledge,” stated Mr. Kelly, “we are one of the few hospitals in the region to receive payments.” 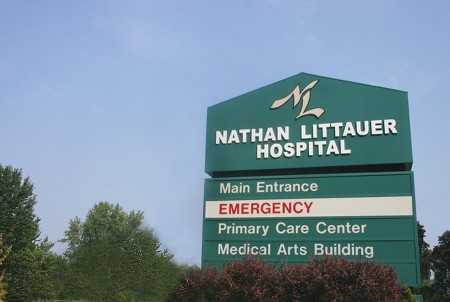 Nathan Littauer is an early adopter of technology

Meaningful use is defined by the Federal Centers for Medicare and Medicaid (CMS) as “The use of certified electronic records in a meaningful manner such as prescribing, the submission of clinical quality measures and the exchange of health information to improve the quality of health care.” It is not an easy journey for any hospital. “Electronic Records Systems are very expensive to purchase and require a tremendous amount of man-hours to transition staff and physicians.” explained Marty Brown, Littauer’s Chief Information Officer. Mr. Brown said, “It is one thing to have the technology, it is quite another to use the technology in a highly pressurized situation like in our Emergency Department.” Mr. Brown reports that all departments are using the technology. The meaningful use payments are helping the hospital to defray the costs associated with adoption of the system.

“Over the last five years Nathan Littauer has invested over 5 million dollars in our technology” Mr. Brown said. Adding, “While this payment helps, it also affirms that we are definitely going in the right direction.” Mr. Brown explains that his staff has spent numerous hours with physicians and providers to make sure they are at ease with the system. “While it was tedious work, we were driven by the fact that our patients ultimately benefit.”

EHR adoption incentives from the Centers for Medicare and Medicaid Services are offered to physicians, providers, and hospitals until 2015, after which the federal government may levy penalties for failing to adopt electronic health records.

Hospital Spokesperson Cheryl McGrattan is not surprised by the distinction stating, “Nathan Littauer has always been an early adopter of technology, electronic health records included.” Recently, the hospital also hosted a conference for electronic medical record users. “People from all over the country came to learn from our team.” She explained, “It was very gratifying.”

The organization credits its success on a communicative interdisciplinary team which continually strives for seamless patient care. “This is a real testament to the quality of the staff that we have at the hospital.” Mr. Brown concluded, “We strive for a single patient chart throughout our system so our team in the hospital, outpatient care centers, nursing home, and Emergency Department are all working from the same record with the same patient information. That’s really important for assuring quality patient care in a multi-facility healthcare system like ours.”