Debra Perham, an administrative assistant in Littauer’s Gloversville Primary & Specialty Care Center, was recently recognized as a Littauer ACE Award recipient. ACE or “Awards Celebrating Employees” is a special recognition for Littauer employees who have gone above and beyond their responsibilities to demonstrate the organization’s mission of caring. It is presented by the hospital’s Rewards and Recognition Committee.

Perham was recognized for her heroic efforts when she saved a family from a structure fire. On an early morning in March, she noticed a billow of black smoke coming from a neighbor’s home. Later she noticed flames were burning through the home’s roof.
Perham went to the home, where she found the father having breakfast with one of the six children. They were unaware their house was on fire. The flames were burning through the roof, not triggering the smoke detectors.

The family quickly evacuated, including the dog. Perham stayed outside with the children until the mother, who was on the second floor of the home, came outside and firefighters arrived. Shortly after the family evacuated, part of the ceiling collapsed on the second floor. Feeling there was little more she could do at that time, Perham left for work at Littauer. Her only concern was that she was about 15 minutes late for work that morning.

“I did what anyone else would have done,” said Perham.

Perham does not consider herself a hero. However, one family is thankful she took the time to respond the way she did.

Nathan Littauer Hospital celebrates Deb Perham as she exemplifies our values in the community. 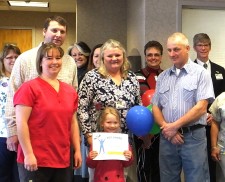