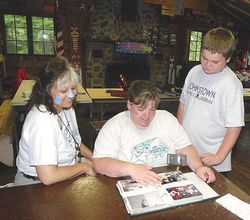 Campers remember their past 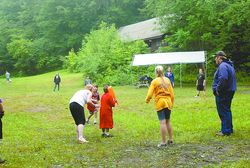 By SHAWN M. TOMLINSON, The Leader-Herald

BLEECKER – It was 30 years ago this summer that Wayne McNeil and Dr. David Clough got the idea of creating a summer day camp for children with asthma.

With the help of the American Lung Association, the two formed Camp Super Kids in 1979. That changed to Camp SuperStarrs when they added children with other health problems such as diabetes.

“We have 45 to 50 kids per year,” said Susan McNeil, assistant director of the camp. “We have about 30 per week” of the two-week camp.

Part of the focus of the camp is to teach children how to deal with their conditions.

“Being a day camp was on purpose,” McNeil said. “That’s so the kids can share what they’ve learned with their parents.”

The camp has approximately 30 volunteers, along with hospital staff members. Many of the camp counselors were campers themselves when they were younger and have returned to help.

“I like watching the kids grow up and how they change,” said Courtney Kwiatkowski, a counselor and former camper. “I try to tell them to never give up,” the 19-year-old said Thursday at the camp.

“I tell them ‘you need to get out of that wheelchair and keep your strength up,'” she said. Kwiatkowski herself walks with crutches and recently spent time at Nathan Littauer Hospital.

“We give hospital staff [members] the ‘heads up’ when Camp SuperStarrs kids are in the hospital,” McNeil said. “The camp has a lasting effect beyond the two weeks.”

Barb DeLuca, a registered respiratory therapist and supervisor at Littauer, said she’s been involved with the camp the last four years.

“The best thing about it is that kids help other kids,” DeLuca said. “It’s also good to get the kids who aren’t very sick together with kids who are because it gives them some perspective.”

DeLuca recalled a little girl in a wheelchair who the counselors gave her first boat ride.

“Her smile was ear to ear,” DeLuca said. “This place is well worth the effort.”

Camp SuperStarrs teaches children how to handle their conditions, such as asthma and diabetes through intruction and games.

The staff members at Littauer give the campers breakfast at the hospital when camp starts at 8 a.m. The hospital then provides transportation to Woodworth Lake, a Boy Scout camp in Bleecker via buses from the Gloversville Enlarged School District, NcNeil said. She said the hospital also brings lunch to the campers and transports them home at 4 p.m.

This week, on Thursday – the optional sleep-over night – local historian Don Williams will be at the camp to tell Adirondack stories and there will be a large cake to celebrate the 30th year of Camp SuperStarrs. For more information about the camp, call the hospital at 725-8621 or go to www.nlh.org.