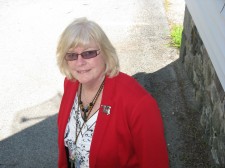 Gloversville, NY…“It all started when I was home sick” stated the Reverend Bonnie Orth as she recounted the story to Nathan Littauer today. “I was looking at Rachel Ray’s website and I saw this icon for ‘Story Ideas’ and I just threw the idea out there.” The idea? For her and a fellow minister girl friend to have a makeover. She explained, “We preach to hundreds of congregants and visit with countless people in our jobs and we need help!” Apparently the idea had some merit, as a producer called Nathan Littauer Hospital the next day looking for Bonnie.

In addition to her duties as a Pastoral Care Coordinator at Nathan Littauer Hospital, the Reverend Bonnie Orth is also the minister of the Mayfield Central Presbyterian Church. Once she broke the news to her friend the Reverend Linda Martin, who knew nothing about her idea, who is also featured in the story, cameras crews descended upon their houses, their closets, their churches and even a wedding to get background footage.

Later, the two went to New York for some shopping, makeovers and finally the taping. “They took it seriously”, stated Reverend Orth. “We shopped for 12 hours straight. I had two stylists with me at all times. And through the entire process, I was not able to see Linda. They kept us separated.” They worked with stylists, make-up artists and hair dressers all leading up to the “reveal”. “It was fun but a lot of work” she notes, explaining. “I have yet to see the entire segment.” stated Reverend Orth.

On Monday, she arrived to work at Nathan Littauer with her new look and some new baubles. “Bonnie has a personality which fills the room.” stated Hospital spokesperson Cheryl McGrattan. “She is very kind to our patients, connecting instantly with them. It is nice that 40 million people will get to meet her.” Ms. McGrattan explained, “She is very humble, so it was fun to hear her recount her story. And she wears her new look so well.”

Littauer’s own to appear on Rachel Ray Show

The show is scheduled to air Thursday, on the Rachel Ray show, on NBC, on local affiliates WNYT, at 3 pm. The segment is also featured now on their website now under “Minister Make-Overs” And on meeting Rachel Ray, the Reverend Orth states, “Rachel Ray is extremely energetic. She is vibrant and she just shines in front of the camera.”