Too much texting, playing video games can cause injuries
January 30, 2011 – By RODNEY MINOR, The Leader-Herald

GLOVERSVILLE – Parents whose children frequently play video games or send text messages might want to make sure their kids are not doing too much of it.

Otherwise, it could end up being painful.

Repetitive Stress Injuries have been reported nationally in connection with texting on cell phones and overuse of the Nintendo Wii and similar video-game system.

Kirsten Lennon, a registered and licensed occupational therapist at Nathan Littauer Hospital, said the problem is people, especially children, tend to spend too much time texting or using the Wii.

“The Wii is great. It gets people up, it gets them moving,” she said. “But they have to take into consideration how much time they are using it.”

Repetitive Stress Injuries is a term for syndromes characterized by discomfort, impairment and loss of muscle strength and function, according to information from the hospital. The pain comes from people performing repetitive movements the human body was not designed to do.

As an example, Lennon noted the Wii – which uses a sensor and “Wii-motes” to simulate motions like swinging a tennis racket and throwing a baseball. A tennis game can include hitting 1,000 balls in a one-hour session. That’s because all someone has to do in the game is hit the ball, not run after it and take breaks like they would in a real game, she said.

Dr. Shannon?Colt, a pediatrician at the hospital, also noted that, with any video game system, it is possible for people to get tension headaches and feel sore from playing for too long.

While RSIs may be thought of as an older persons ailment normally, they can happen to anyone, she said.

Sometimes, bad habits that start in childhood can have a negative effect on someones health when they get older.

“If [children] can break those bad habits early, they will be ahead of the game,” she said.

Lennon had many recommendations to help people avoid excessively playing on the Wii, including:

Start slowly. See how your body tolerates an activity.

Cross train on the Wii, just like people do in real life.

Lennon said an easy thing to do is to switch between games. People could switch from bowling, to dancing, to playing guitar on the Wii, for example.

“People can use different muscle groups that way, not just reuse the same ones,” she said.

Warm up before you start playing, similar to how you would before exercise.

If a person’s body starts to hurt, they should take a break. They should not play again until the pain is gone.

Treat pain from playing just like any other; Use ice, rest and if the pain persists talk to a doctor.

Colt noted that parents may have to step in and limit their child in how much time they spend playing.

Americans between the ages of 8 and 18 spend an average of 7 and hours a day using an electronic device. Also in America, 75 percent of 12 to 17 year olds own a cell phone and 1/3 of teens send more than 100 text messages daily, according to information provided by the hospital.

Part of the problem is many keyboards tend to be small, so one finger is all most people can use to type. People also tend to have bad body position when they type, which she demonstrated by taking her phone out and hunching over in imitation of the bad posture.

Lennon recommends people alternate fingers when they text. People should take a break once in a while if they find themselves sending messages frequently, she said.

She demonstrated a couple of exercises people can do as well to stretch out their fingers before using them. One involved the thumb on each hand against the fingers on the same hand five times. She also used rubber bands, putting them on her fingers and opening them to build up strength.

Colt noted there are more than just physical ailments that can result from too much texting.

In addition to sometimes being a distraction and promoting poor writing, too much texting could hurt a child’s social skills.

Lennon said while they have not seen children coming into the hospital with ailments related to use of the Wii or texting, they wanted to get the word out about it. Injuries from overusing the Wii and texting have become national issues, she noted, and it will help local parents to be aware of the issue.

For more information about RSIs, visit the NINDS website at www.ninds.nih.gov

Cheryl McGrattan, public relations director for Nathan Littauer Hospital, said the hospital also will put together a YouTube video about stretching before using the Nintendo Wii. She said it should be available on the hospital’s website in the next three weeks. 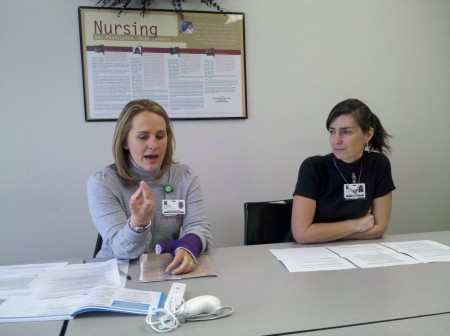