Doctors see more sprains and strains related to weather
CAPITAL REGION — To save money this winter, more families than usual are opting to remove ice and snow themselves instead of hiring a service, but it could be costing them money in medical bills.

An increase in storms means an increase in snow- and ice-related injuries, according to Dr. Todd Duthaler, chief of emergency medicine at Nathan Littauer Hospital in Gloversville.

“It’s been a very slippery winter,” he said, speaking about the many sprained wrists and ankles he sees annually. “Another cause of concern is more people trying to clear their roofs and harming themselves.” 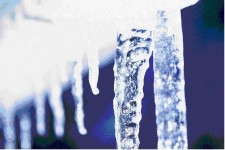 “It has been a slippery winter” Dr. Todd Duthaler

Most local hardware stores have had trouble keeping roof rakes, shovels and rock salt in stock.

T.J. Grim from Bellevue Builders said his business is out of snow rakes because of the large number of “do-it-yourselfers” this year.

“We feel bad because we have to turn people away,” he explained.

Duthaler said numerous people have come to the hospital with broken bones or back injuries from falling off ladders or the roof.

“People are hearing on the news about getting the snow and ice off their roofs and becoming concerned, but they aren’t thinking about taking appropriate safety measures,” he said.

Duthaler recommends staying on the ground to clear roofs, but that too can be a problem.

Ray Hayden, owner of Hayden Brothers Snow and Ice Removal in Schenectady, said more customers are calling for help later in the season because they are nervous about injuries.

“They see people getting hurt or have gotten hurt and they get scared,” he said. “They want people that know what they’re doing.”

Hayden explained most injuries he sees come after someone uses a roof rake. People tend to stay on the ground and pull the snow off the roof and toward themselves.

“You shouldn’t do that,” he said. “That could be 400 pounds of snow and ice falling down on top of them. They don’t know.”

Hayden explained it’s important to use the right equipment to remove ice while on top of the roof — like a ladder that attaches to the roof so it doesn’t slip — or hire someone if help is needed.

The large amounts of snow are causing other injuries.

Dr. Krystal Clarke of Sunnyview Physical Therapy said most patients are coming in with sprained backs or ruptured discs from shoveling snow or lugging a snowblower.

She recommends going slow and using the proper form when shoveling snow.

He said people coming to the hospital with chest pain or trouble breathing is an issue during snow-shoveling season. There’s also an increase in heart attacks.

Clarke said the majority of her patients with snow- and ice-related injuries are seniors.

“Pride is a big factor. Always ask for help if it’s needed,” she said. “If it’s too difficult to hire someone, ask family or neighbors.”

Using common sense is the best way to prevent injury, according to Duthaler.

“Be careful. Take breaks. And if you start to feel discomfort, stop what you’re doing,” he said.