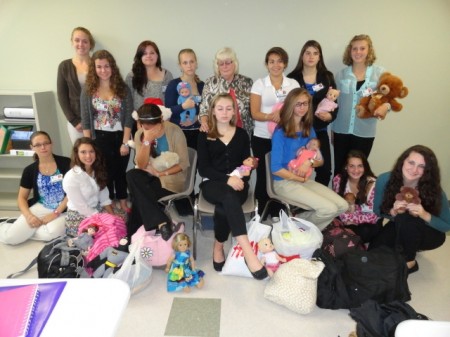 Yesterday, Nathan Littauer’s HFM BOCES’s New Visions program participants were exposed to the complex issues of Domestic Violence through a session led by the Reverend Bonnie Orth, an internationally-known domestic violence instructor and Pastoral Care Coordinator for Nathan Littauer Hospital. Reverend Orth is also minister at the Mayfield Central Presbyterian Church. She had the students live in the shoes of women who are victims of abuse. Some students assumed the role of a silent witness.

Using a program, called “In Her Shoes” the students assumed the identities of women who were abused by their significant other, and with bags and dolls in tow, attempted to navigate the complexities of domestic violence abuse. Some women had to pretend to leave in the middle of the night and attempt to find shelter for herself and their children. Some students had to follow scenarios that called for them to forgive and forget, returning to their abuser only to be abused again. The students wore Band-Aids symbolizing a beating and carried their things and dolls throughout the hospital. The students then learned that the role playing they had assumed represented a real story and real women. In the end, three of the students’ characters died at the hand of their abusers.

Bonnie Orth also reviewed cycles of abuse in teens as well. In a particularly poignant moment Reverend Orth said, “I want you to think about Alex Kogut, this Thursday. It is her funeral”. Reverend Orth then passed out an article about Alexandra Kogut, a 21 year-old from the Utica area who was killed Sunday morning allegedly at the hands of her boyfriend.

The girls reflected upon the exercise stating they when they were assuming the roles of their character, they felt frustrated, isolated and confused.

The New Visions program is an academically rigorous one-year program, located at Nathan Littauer Hospital, and is designed for high school seniors interested in medical and health related professions. Students enrolled in the New Visions Health Careers program learn through traditional methods (lecture/discussion, reading and research, writing and specific topic study) as well as participation in clinical rotations—structured observations of medical professionals and procedures. These experiences provide students an opportunity to directly learn about the various health professions, appropriate patient care, and the latest in medical treatments and testing.