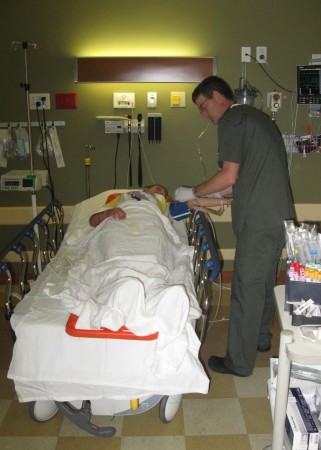 Littauer  practices a disaster, with “patients” wearing make-up and acting the part of victims

GLOVERSVILLE — Birds were chirping as the sun poked through clouds while a few patients meandered through Nathan Littauer Hospital on Tuesday.

It was a typical, not-too-busy morning at a hospital that saw roughly 24,000 emergency room patients last year.

But that would all change with a phone call aimed at giving hospital staff some practice for what they’d do if a calm morning was shattered by an explosion at a local middle school.

Though it took place just two weeks after the Boston Marathon bombing, Nathan Littauer’s emergency — a bombing — was coincidentally planned two years ago. The initial phone call alerted the hospital of only one thing: there had been an explosion at a local school, and no further information was available.

That call set in motion an emergency plan that runs from the hospital’s top executives through engineering and other departments — it was time to prepare for the unknown.

The scene in the emergency room was not what one might expect — there weren’t a bunch of harried doctors and nurses running around shouting and calling out for supplies. 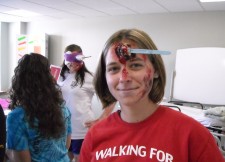 Instead, each member of the staff had a role to play and moved into position at the emergency room entrance. Rooms were being prepped and supplies were being gathered.

Behind the scenes, hospital President and CEO Laurence Kelly joined other administrators in a command room to prepare the hospital for what would come next.

Kelly said he and others were taking a “snapshot” of the hospital to answer several questions, like how many physicians and nurses were on hand, how many patients were already there and how many were in surgery.

If there were non-essential elective surgeries planned, they would be canceled to ensure sufficient medical staff and equipment for emergency treatment.

Within 20 minutes, another call came in to report that 14 patients were on their way in. Critical work by EMTs to stabilize patients for transport had already taken place. Some victims would be coming in via ambulance; another group of 10 was headed in on a bus.

“Then we knew we had enough staff,” Kelly said. Hospitals in the vicinity of the Boston Marathon took on anywhere from 14 to 30 patients following the April 15 bombing, officials said, and Nathan Littauer had sufficient operating room space, staff and equipment available to handle 14 victims, Kelly said. If it didn’t, he said, the next step would be to start calling in doctors, nurses and other staff not currently working.

A series of steps were under way in the front of hospital as staff awaited patients. Then the patients — played by BOCES students considering careers in health care — showed up all at once, and there were more patients in the ER than nurses.

Registered nurse Bonnie Looman, a critical care manager, admitted they were temporarily outnumbered. “We are. But that’s what we do,” the 40-year hospital veteran said calmly. “We’re going to need more nursing,” emergency room doctor Robert Werblin said, loud enough to be heard but also in a calm manner.

He had already asked for several pieces of equipment to be prepared, including intravenous holders and oxygen monitors. One by one, each patient was directed to the appropriate place. Many who were walking and appeared to have flesh wounds were taken to one side.

Others were unconscious; one was crying out for her baby, one was dead and bound for the morgue and another patient came in with a simulated object protruding from her eye. That patient was brought to Room 10, where RN Shawn Cronin took over.

“I’ve got a priority-one here,” said Cronin, summoning Werblin for his input. Werblin called for a CT scan, and Cronin continued to monitor the patient. Cronin got the patient hooked up to monitors that check blood pressure, oxygen, respiration and other factors after making sure the eye wound was secured and her airway wasn’t restricted.

“Now I’m one-on-one with this patient,” said Cronin, who said the object had to stay where it was until staff determined whether it was keeping an artery or vein from gushing.

As nurses and doctors attended to patients, several other tasks taking place highlighted the complicated nature of mass casualty response.

Family members would be showing up, so the hospital designated a family liaison and a spot for family members to wait — the cafeteria. Another site would be set up outside for the media expected to show up. One staff member was cataloging all of the patients who came in and marking their status and location on a chart. They were also recording how much time it took to get patients stabilized.

“We’re trying to improve our time,” said Carrie Newkirk, the hospital’s security supervisor and emergency management coordinator. From past experience with multiple injuries, Newkirk said there was one major difference between the drill and the real thing: there would be fewer people in the way during a real incident. Several staff members were on hand during the drill to evaluate everybody’s performance, and members of the media allowed to view the drill were also in the corridor. “It goes much smoother than the drills,” Newkirk said.

Susan McNeil, the hospital’s volunteer services director, said the staff’s relaxed demeanor during the drill is typical even for real-life situations. “It is not abnormal for it to be calm,” she said.