“Shirley Cook is a part of this hospital” 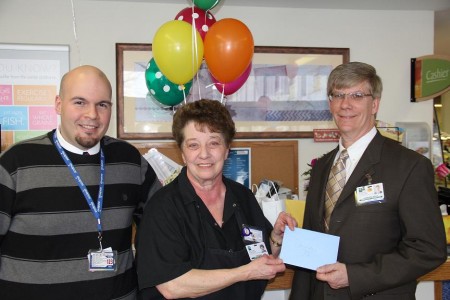 Shirley Cook worked at Nathan Littauer for 50 years. She recently retired after a send-off from a grateful hospital.

In 1963 when Shirley Cook began her career at Nathan Littauer Hospital, the Beatles had just released “I want to hold your hand”, “To Kill a Mockingbird” was a favorite movie, the US started to use zip codes and AT&T had introduced touch tone phones. Gas prices were at $.30 a gallon. Last week, Nathan Littauer Hospital bid farewell to Shirley Cook who retired from Nathan Littauer’s Nutrition Services Department after 50 years of service. The hospital threw her a celebration on her last day working at the hospital. “Everyone likes Shirley Cook.” stated Laurence E. Kelly, Hospital President and CEO. He added, “The large turnout at her reception was the best way to acknowledge her career.”

“Shirley is as much a part of NLH&NH as the foundation the building was built on.” stated Timothy J. Forte CDM, CFPP, and General Manager of Nutrition Services for Nathan Littauer Hospital & Nursing Home and Shirley’s supervisor. “Having been with us for 50 years, Shirley experienced all of the changes our department has embarked on over those decades. Shirley’s bright smile, unmistakable laugh and warm heart will be missed. I am better for knowing her”.

In a room filled with balloons, Shirley was surprised by the party. Hundreds of people came, some with gifts, many with stories, and all to bid her goodbye. “I will miss buying my coffee and chatting with her. She always had a smile for me” said Martin Brown, a hospital employee.  Shirley’s family was also at the ceremony.

Mr. Kelly surmised, “Shirley recently wondered to me how much money has she handled at the cafeteria’s cash register. I told her at least a million dollars!”

Shirley received a bonus check as part of her retirement package and a special $500 gift card from the hospital. Pictures of the party may be seen on the hospital’s Facebook site.