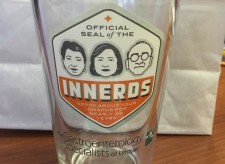 Trying to bring a little humor to the process, anyone getting scoped at Nathan Littauer’s endoscopy facility gets a complimentary pint glass scaled with markings o measure out their laxative. Afterward, it makes an ideal beer mug.

Bringing humor to a serious issue:

FULTON COUNTY — Fulton County is in the odd position of having roughly the same incidence of colon cancer as the rest of the state but a much higher death rate.

A variety of factors may be at play, but health care administrators, regulators and providers agree the most likely cause is the low rate at which county residents are screened for cancer. So the local hospital has been taking steps to make it easier to get a colonoscopy, and taking steps to convince people to go ahead and get it done.

Nathan Littauer Hospital’s endoscopy office in Johnstown, which marks its first anniversary in April, is seeing 20 patients a day, more or less clearing the months-long backlog that existed when the only place to get a colonoscopy in Fulton County was at the hospital in Gloversville.

Colonoscopies can save lives, but they’re nobody’s idea of fun. The procedure requires the patient to skip several meals, drink a gallon of laxative, and then be sedated the next day and examined with a tiny camera mounted on a long slender tube that’s inserted in the rectum.

Some may find it embarrassing.

So Littauer is spiking its outreach campaign with a bit of humor. Anyone getting scoped at Littauer gets a complimentaryscaled with markings to measure out their laxative. (In happier times, it makes a spiffy beer glass, too.) And the procedure will be performed by the Innerds, “nerdy about your innards for nearly 100 years.” (The three doctors pictured on the beer glass are approaching a century in practice, in total.)

A pencil and a humorous little work pad to use while sitting in the bathroom round out the package.

Patrice McMahon, Littauer’s vice president of primary/specialty care services, was previously the administrator for a gastroenterology practice, so she had a lot of experience with hesitant patients.

“I knew the biggest way people would deflect their discomfort over it was through humor,” she said. This colored the hospital’s outreach.

Dr. Kamini Ramani, one of the  at the new Kingsboro GI Center, said she performs 1,600 to 1,800 colonoscopies a year and considers it a crucial tool to save lives.

“It is still probably not being done as much as I would like to see it done,” she said.

It’s a safe procedure for most patients, Ramani said, with physical damage resulting to the colon about once every 3,000 times under ideal conditions. The risk rises under less-than-ideal medical conditions, so in some cases non-invasive tests such as CT scans are substituted for colonoscopy.

Ramani said the CT scan is good for detecting larger and cancer, but not as accurate as a colonoscopy for identifying precancerous problems. Early diagnosis is key to successful treatment, she said, because colorectal cancer takes a long time to develop but once it does it is a tough opponent to fight.

“We do try to convince people that doing a colonoscopy is a good idea,” she said. “Many patients don’t know that they can have this done, and they should be having it done.”

In the same period, DOH statistics show 17.8 male and 12.8 female deaths from colorectal cancer statewide per 100,000 population, compared with 23.9 male and 16.5 female deaths in Fulton County.

“Our effort is in response to that,” McMahon said.

Littauer for years had a single gastroenterologist and two endoscopy rooms. The backlog for colonoscopies was six to 12 months, McMahon said, and many people in the hospital’s service area lacked money, transportation or motivation to travel elsewhere for quicker access to the procedure.

“When you’re not screened, you don’t have the opportunity to find that precancerous polyp,” McMahon said.

Littauer set out to recruit a second and third physician — Dr. Luz Alvarez and Dr. Hamid Azizur Rehman, both previously in Amsterdam — and outfitted a new site for them to work, a former Littauer ambulatory care center on South Kingsboro Avenue Extension in Johnstown.

In April 2015, the Kingsboro GI Center began operations three days a week. Two nurse practitioners work there with the three doctors, and they perform about 20 procedures a day. The endoscopy rooms at the hospital remain in full-time use, typically for patients unable to leave the hospital.

The co-payment at the Kingsboro GI Center ranges from $50 to $100, depending what insurance the patient has.

Ramani said the colonoscopy is part of a larger picture. Healthy diet and lifestyle on the part of the patient reduce the risk of colon cancer. Rectal exams and feces tests by the family physician during the annual checkup are important for early detection, as the colonoscopy is recommended only once ever 10 years starting at age 50 for the general population.

Nathan Littauer’s efforts are mirrored in the statewide public awareness campaign by the New York Department of Health to get more people to undergo colorectal cancer screening. A DOH spokesperson said the lower-than-average screening rate in Fulton County is a likely factor in the higher-than-average death rate.

In 2013-2014, the most recent years for which data are available, the colorectal cancer screening rate in Fulton County was 59.3 percent, compared with 68.7 percent statewide, according to DOH. Surrounding counties had higher screening rates and lower death rates, DOH noted.

The state goal is 80 percent screening statewide by 2018.

“If you put up a barrier and people really have to pursue it, it’s going to fall by the wayside,” she said. “Those barriers were here and now they’re not.”