Home > 2018 > News Stories > While most hospitals are reporting longer ER wait times, NLH has improved theirs

While most hospitals are reporting longer ER wait times, NLH has improved theirs

Here’s a story from our media partners at The Gazette: 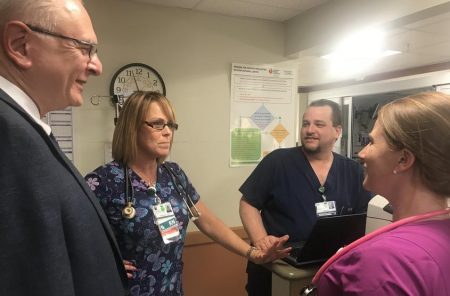 Waits at some hospitals are getting longer from year to year — even as the statewide average steadily declines, and even as hospitals steadily build urgent care facilities to divert patients with less-severe injuries and illness from their emergency rooms.

The Daily Gazette looked at five years’ worth of data archived by the federal Centers for Medicare and Medicaid Services to detail the trend.

The elapsed time from when a patient walks in the door to when that patient receives a diagnostic evaluation is one of many metrics compiled by the agency, but it’s critical in shaping a patient’s perception of a hospital visit.

The data is generated through anonymous, standardized surveys filled out by patients upon discharge; the results are self-reported by hospitals to the federal agency.

From 2012 to 2017, the annual average wait time decreased from 37 to 20 minutes in New York state, and from 28 to 25 minutes nationwide, at hospitals large enough to generate meaningful amounts of data.

In the Capital Region, the average wait ranged from 13 minutes at St. Mary’s Healthcare in Amsterdam to 54 minutes at Albany Medical Center over the same five-year period.

In the most recent period for which data is compiled, April 2016 to March 2017, the disparity was even greater: 11 minutes at St. Mary’s and 70 minutes at Albany Med.

Some points jump out of the data:

Courtney Burke, chief operating officer of the Healthcare Association of New York State (HANYS), said the decreasing wait times are a result of an industry effort to provide better patient experiences and outcomes. A key part of this has been adding convenient outpatient treatment options — the ubiquitous “urgent care center.” These are part of a general drive to deliver better service, she said.

However, there isn’t anything unique to New York state that caused hospital emergency departments here to have wait times longer than the national average in 2012-13 or shorter in 2016-17, Burke said.

Reducing the wait is just part of the picture, she said. Improving access and improving quality are equally important.

HANYS, a trade group that represents many hospitals, has worked with its members on other critical measures of care, including reducing readmission rates and hospital-acquired infection rates. It has not had as much input on care in emergency departments (which is the industry term for what was previously called the emergency room, or ER).

Dr. Frederick Goldberg, vice president-medical affairs and chief medical officer at Nathan Littauer, said the hospital’s steady progress was a result of steady effort by a lot of people.

“Some of this improvement preceded some of the current folks that are making a difference,” he said.

The wait time doesn’t officially end until the patient is evaluated by a doctor, nurse practitioner or physician assistant, and that is a bit misleading, Goldberg said: Long before that average 12-minute wait is over, a Littauer patient will have been seen by a nurse who will make critical decisions on the direction of the patient’s care.

“Our nurses are health care professionals, and without them, this process would not be possible,” Goldberg said.

Margaret Houghton, nurse manager of the Littauer Emergency Care Center, said: “Because we are a community hospital, we see everything: Trauma, distress, heart attacks.”

The pivot-nurse model of triage moves the most critically distressed patients past the normal intake process, so care can begin almost immediately, but it also expedites less-critical patients into the proper care setting, she said.

“We have a beautiful waiting room, and it’s rarely used, and we’re proud of that,” Houghton said.

Littauer sees 24,000 patients a year in its Emergency Care Center.

“Primarily, it had to do with teamwork,” said Chief Nursing Officer Michele Walsh. A group from across the hospital was assembled several years ago to look at how every stage of the process could be improved, and just as importantly, how the stages could be meshed together more efficiently, she said.

Factors that might seem unrelated to the Emergency Department actually have an outsize influence on it. If an inpatient ward in another part of the building is slow to discharge its patients, for example, the emergency department can’t admit patients into that ward, and therefore can’t clear its own beds to make way for the next emergency department patient.

Ninety percent of St. Mary’s inpatients are admitted from its emergency department, so the potential for a traffic jam exists if every step of the process doesn’t work smoothly.

St. Mary’s reputation has spread, but mostly by word of mouth. The hospital hasn’t particularly advertised the short wait times, said Jerri Cortese, director of community relations. That’s a delicate proposition, she said, because when someone is in great pain, any wait seems too long, so it seems wrong to tell them they’ll likely have to wait 11 minutes to be seen.

Nonetheless, people in the region are aware of the short wait times, said Kenneth Chicoski, manager of the Emergency Department. Many of the 32,000 patient visits per year are from residents of a neighboring county.

Walsh said out-of-region visitors stopping in on their way to or from the Adirondacks often remark on the speedy intake.

He recalled being told in medical school 30 years ago that there was a shortage of primary care physicians in the United States. There still is. It’s worse now. He’d hire two tomorrow, if he could.

“We’re recruiting for primary care,” he said. “I think every area in upstate New York is, as well.”

Perhaps because of this, or for other reasons, many younger people aren’t developing long-term relationships with family doctors and, instead, wind up in emergency departments or urgent care clinics. This also serves to deprive them of the steady presence of a single doctor who gets to know them and can help keep them from developing health problems, rather than treating health problems as they arise.

Saratoga Hospital has cut its wait time in each of the past four reporting periods but remains well above state and national averages in the most recent year, at 33 minutes.
​
Dr. Richard Falivena, a vice president of the hospital and its chief medical and physician integration officer, said the hospital is aware its wait time is longer than average.

This has happened: The main hospital emergency department had nearly 38,000 patient visits in 2017, while Malta had approximately 33,000 and Wilton nearly 34,000, with shorter average wait times than at the emergency department. As another benefit, both facilities are about 10 miles from the hospital, cutting drive time for some patients.

Looking at a subgroup of patients for whom every minute is critical, the Saratoga Hospital Emergency Department wait time is a lot less than 33 minutes.

That facility rates arriving patients on a triage scale of 1 to 5, with 1 being the most critically ill or injured, such as stroke and heart-attack victims. Falivena said Triage 1 patients had only a 14-minute average wait time in 2017, and doctors were looking at EKG results for suspected heart attack patients just six minutes after arrival, on average.

The flip side of this is that many Triage 5 patients had to wait longer than the average 33 minutes.

Even among Triage 1 cases, there’s nuance. A suspected stroke patient will go in for a brain scan immediately upon arrival, which stretches out the officially recorded wait time. The doctor can’t begin evaluation or treatment until it’s clear whether there’s a clot or a bleed in the brain — the two conditions have very different treatments, and the wrong choice can leave the patient debilitated or dead.

“There are times when the arrival-to-provider time is not the best metric of good care, and a great example is stroke.” Falivena said.

In Schenectady, Ellis Hospital’s emergency department is a new, state-of-the art facility with an average arrival-to-evaluation wait time of 36 minutes — the same as the emergency room it replaced.

Dr. Carlton Rule, vice president and executive director of Ellis Medical Group, explained the reasons for this via email:

“The Ellis Hospital Emergency Department remains one of the busiest in the Capital Region, handling more than 75,000 visits each year. It is a resource our community relies on.

“While there are many challenges in running an emergency department in an upstate city, we continue to implement new initiatives to address wait times and continuously improve quality of care. In addition, Ellis has invested heavily in improving patient access at our other facilities, giving patients more options when they have less complex cases that can be treated outside the (emergency department) setting.

“For instance, we have expanded walk-in options and hours at our primary care facilities throughout the region. And later this year, we plan to open an urgent and primary care practice at Mohawk Harbor, which is designed to give patients additional options for less-severe cases.”

St. Peter’s Hospital in Albany is at the heart of the largest medical organization in the Capital Region: St. Peter’s Health Partners, with nearly 12,500 employees in more than 165 locations.

Its emergency department is busier than most, but not as busy as those at Albany Med and Ellis. The wait time in 2016-17 averaged 43 minutes.

Dr. Frank Dimase, chief of the Department of Emergency Medicine, summarized the factors influencing the operation of the St. Peter’s Emergency Department via email:

“We have also been looking at other physical improvements, for example, making some changes at the triage area, which we believe will improve wait times in the (emergency department).”

Albany Med’s Emergency Department is the Capital Region’s busiest, narrowly topping Ellis with nearly 79,000 patient visits in 2017. Albany Med also recorded more than 100,000 patient visits in 2017 at its EmUrgentCare clinics. Like the hospital industry as a whole, Albany Med sees urgent care as a way to provide care in less time and at lower cost for those whose conditions are not serious enough to require emergency room treatment.

Nonetheless, Albany Med recorded the region’s longest average emergency wait — 70 minutes — in 2016-17. Albany Med said in a prepared statement that it has taken steps in response:

“As the region’s only Level 1 Trauma Center, Albany Med cares for the sickest and most critically injured patients. Like every other hospital, Albany Med treats patients by prioritizing their care according to severity of their illness or injury to ensure that patients who need immediate care are treated in a timely fashion.

“Albany Med has taken numerous steps to meet the ever-increasing and diverse needs of patients seeking our emergency care, including opening 10 EmUrgentCare Centers throughout the region to provide access to Albany Med providers for lower acuity needs, as well as developing a dedicated pediatric emergency department to open this summer specifically for the needs of children and their families.

“This will help provide a uniquely appropriate environment for children while expanding our capacity for treating emergency needs.”