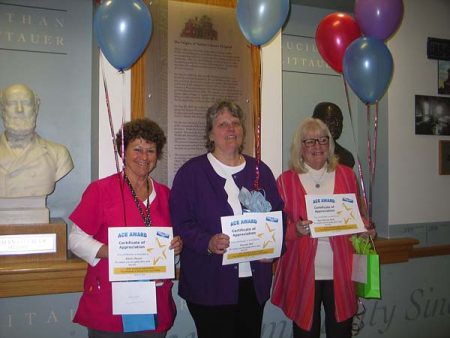 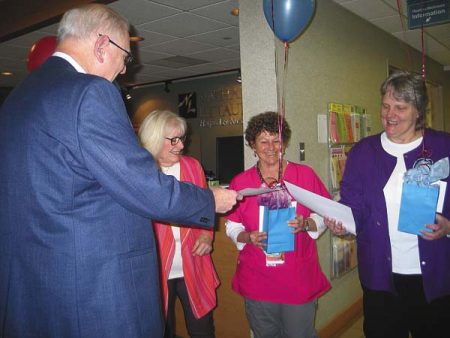 GLOVERSVILLE — Three Nathan Littauer Hospital and Nursing Home employees were surprised with the A.C. E. Award — Awards Celebrating Employees –which they received Monday. The Rev. Bonnie Orth, Pamela Bell and Alexis Hayes each received the award for their extraordinary work done outside the scope of their role within the organization.

Carla Kolbe, public relations coordinator at Nathan Littauer said this is one of the most prestigious awards given. She said within the last five years, only three A.C.E. awards have been given.

“On behalf of Littauer, I’d like to say how very proud we are of these three employees,” Kolbe said. “Their compassion and humanitarian efforts have gone far beyond what they bring to Littauer every day. For these reasons, they are recognized.”

Orth, Bell and Hayes joined 31 others and traveled to Pachaj, Guatemala in February for nine days to provide care to Guatemalan residents who don’t get the same medical treatment as we do in the United States.

While in Guatemala, Orth held a two-day Domestic Violence Women’s Retreat for a total of 100 women — 50 women each day. Orth said women don’t have as many options when it comes to domestic violence in Guatemala. She goes every year and holds workshops for the women and gives them each a gift bag. She said she does an exercise with the women and asks them if they were queen for a day what they would do.

“They have some really profound answers like ‘I would make sure every child in the village could eat today and have a full stomach.’ That’s what they would wish for because that shows you that does not happen,” Orth said.

“I think that it’s really nice that they recognized us,” Orth said of the award. “It was nice to take employees from the hospital and make a difference in the greater community and by greater I mean outside this country.”

Hayes worked the medical clinic while in Guatemala, along with one doctor and four nurses. There they treated about 180 medical patients.

“I was very excited to take part again in the mission for the second time,” Hayes said. “It’s such an awarding thing to do with your life. I’m so grateful for what we have here in our country. And it was wonderful to meet the natives down there; they were so kind.”

Hayes said when she was working in the medical clinic, there was so little they could do for the patients, but were able to give them medications they brought to Guatemala.

“They are so grateful that we are able to do just that little bit for them,” Hayes said. “Even if we can make them feel better for a month , they hug you and kiss you and it’s just so rewarding.”

Orth said some of the patients had walked four hours just to get to the clinic to get treatment and some had to walk with kids.

When in Guatemala, Bell worked in the dental clinic along with two dentists, one hygienist and staff treating about 187 dental patients. There they painted children’s teeth with fluoride which prevents them from getting cavities.

This was Bell’s second time going to Guatemala.

“It was rewarding,” she said. “It was work, but it was good work. It was helping them and they also helped us.”

Bell said some of the patients in the dental clinic were scared, but trusted them even though the doctors, nurses and staff were the foreigners. She said one of the patients thanked them by giving them each a piece of fabric she had woven herself by a means of thanking them.

“We had a few days to ourselves too which was nice to see the culture,” Bell said.

The three also had an eye clinic and dispensed approximately 130 pairs of eyeglasses.

There were also workers there who built a second story cement classroom for a school and a built a covered play area in which the workers dug a 6 foot deep and 24 feet around trench.

Hayes, Orth and Bell also faced a few struggles while on the trip. Hayes explained how they didn’t have access to any blood work, X-rays or anything and had to go by the symptoms the patients were telling them and it all had to be done through an interpreter because they spoke Spanish. Orth said many of them didn’t even speak Spanish, but an indigenous language.

Other struggles the three faced were bringing in donations. Orth said they had 58 suitcases filled of donations, but the airlines were not cooperative, so they had to pay $2,000 to bring the suitcases through.

“Nathan Littauer donated a lot of medical supplies and we brought those with us. The dentist had 12 suitcases of dental supplies,” Orth said. “A lot of the times, the airlines will let non-profits bring in free luggage and they were not as cooperative as we hoped.”

Overall, Orth said the trip was a lot of work, “but it was worth it.”