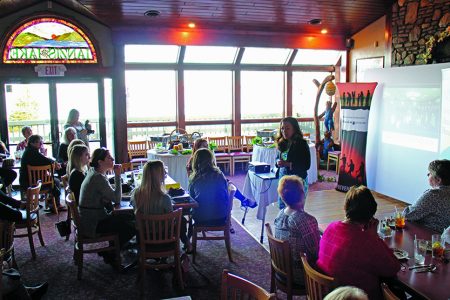 A story shared by our media partner at McClary Media – Posted by The Recorder News | Apr 24, 2018

By DUSTEN RADER/For The Recorder

MAYFIELD — A diagnosis of cancer is a devastating moment for many, and the side effects of treatment can further exacerbate the already difficult situation.

That’s why New York Oncology Hematology and Nathan Littauer Hospital have joined forces for the second year to share critical information with hair stylists and barbers about how to support and empower cancer patients.

Dozens of area women, stylists and barbers gathered Monday at Lanzi’s on the Lake in Mayfield for Salon Strong 2.0. The event included several speakers, including hairstylists, a cancer survivor, and Dr. Arsyl De Jesus, a radiation oncologist at New York Oncology Hematology’s office at the Riverfront Center in Amsterdam.

The topic of De Jesus’ presentation was Ways to Better Serve Your Clients after a Cancer Diagnosis. The goal, she said, was to provide attendees with skills and insight to be proactive with clients. 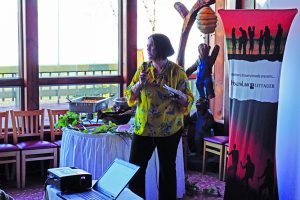 Cancer survivor Kelly Quist, of Amsterdam, speaks during Salon Strong 2.0 held Monday, April 23, at Lanzi’s on the Lake in Mayfield.

De Jesus covered several aspects of the subject, including what to expect, what to say, 10 ways to talk to someone with cancer, how to respect the uniqueness of cancer, skin care, hair care, and how to be a part of someone’s cancer team.

“The purpose of this event is two-fold: Empower hairdressers to feel comfortable with clientele, and let hairdressers know what services are available,” De Jesus said.

A patient of De Jesus’, Amy Karas, of Gloversville, said she got involved in the event to encourage beauticians to cater to cancer patients and the unique needs that they have.

Karas said her friendship with her hairstylist Dottie Detterieder, of Beauty and Beyond in Gloversville, was a major support during recovery.

“They have a big part to play and I don’t know if they realize it or know what to do — it’s a wonderful program and an awesome thing for the community,” she said.

Karas noted she felt encouraged to take her hair off instead of letting the cancer get to it.

“When you take it off, you’ve taken control over it — it doesn’t control you,” she said, adding that even though her hair has since grown back, she keeps it short and still uses the dozen or more wigs she acquired during treatment. 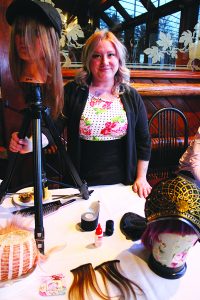 Jennifer Barnett, who makes pieces for Pinup Jordan’s Mermaid Lounge in Scotia, had several colorful wigs on display during Salon Strong
2.0 held Monday, April 23, at Lanzi’s on the Lake in Mayfield

ith it because I was bound and determined that it was not going to get me — I was going to get it,” Karas said.

Another survivor, Kelly Quist, of Amsterdam, said her relationship with her hairstylist Amanda Landrio, of Bella Vita in Amsterdam, taught her that when hair begins to come back it’s a time of “reinvention and rebirth.”

“I don’t think I was fully prepared for what it would be like to lose my hair and the journey back from that,” Quist said. “I fully embraced it

and shaved it off. I definitely would have taken advantage of more resources had I known about them. That’s why this program is important, because we have to let all the stylists know the role they play in the lives of cancer survivors and patients. There is a really important bond there, and I think the more information and resources they have the more they can share.”

Representatives from the American Cancer Society were present with wigs and beauty products.

Jennifer Barnett, who makes pieces for Pinup Jordan’s Mermaid Lounge in Scotia, had several colorful wigs on display during the event.

Although only in its second year, Salon Strong has spread beyond hairstylists to barbers to be more inclusive of men. Barbers Michael Medina and Jamie ‘Pito’ Ramos, of the Fulton County Barber Shop in Gloversville and The Other Shop in Canajoharie, were excited to receive Salon Strong decals after participating the event. The barbers will be able to put the sticker in their window to let customers know that they have taken steps to be sensitive to the needs of cancer patients.

In addition to the Salon Strong event, a workshop is being planned for June. For more information, call 518-736-1120. 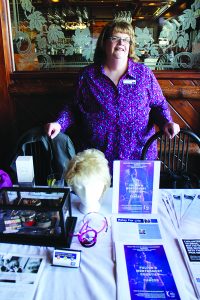 American Cancer Society Program Manager Wendy Stickley-Ocker poses with wigs and beauty products to demonstrate to attendees of
Salon Strong 2.0 held Monday, April 23, at Lanzi’s on the Lake in Mayfield.