Sen. Schumer visits Littauer and learns about The Baby Box

Sen. Schumer visits Littauer and learns about The Baby Box

Here’s what our media partner The Leader Herald had to share: 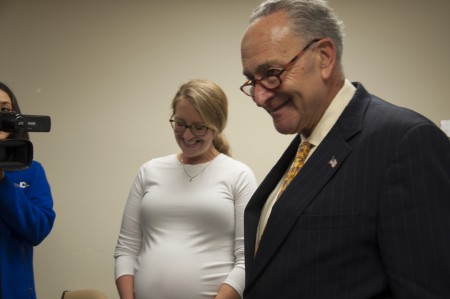 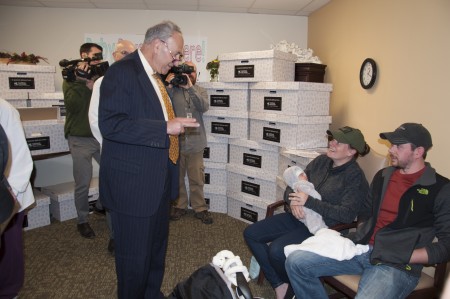 The hospital began the program earlier this year and has seen new parents take home a box containing diapers, coupons, a sleep sack, booties, bibs and books among the many items tucked inside. The boxes also double as a bed for babies up to eight months.

Baby boxes have been given out in Finland to all new parents since the late 1930s.

To get their baby box at NLH, parents-to-be watch a short series of videos made by the medical specialists at Nathan Littauer that cover a range of topics including breastfeeding, tobacco and alcohol use and safe sleep. They can watch the videos on their own computers or use tablets that were given to NLH by The Baby Box Co.

Littauer is believed to be the first hospital in New York state to send new parents home with a baby box. The hospital worked with The Baby Box Company of Los Angeles, which does both direct-to-consumer sales and wholesaling of the baby boxes. The educational component is offered through The Baby Box University.

Parents then take a one question yes/no quiz relating to the videos they watched.

Maureen Mosher, RN and Manager of Maternal Child Health at the hospital said the boxes have proven very successful, with parents being very excited to take the items home.

She said community support for the program has been strong as well, including fundraisers to help the program.

Darcie Knapp of Northville who is expecting her third child later this week said she was thrilled to be getting one of the boxes.

Knapp, who works at Littauer at a Licensed Practical Nurse in the operating room, said that one of the biggest challenges she found with her other two children was finding somewhere they would sleep. She said she tried a variety of different item, some of which he was find with, other he refused to drift off in.

In addition, Knapp said having one of these boxes means less items taking up space in the house. She said with new babies parents often have to buy a crib, bassinet, pack-n-play, swing and bounce seat. She said having the baby box will mean she can cut down on the amount of items being bought.

She said with a toddler at home, having something she can set the new baby in as she moves from room to room with her son will be helpful.

“This stuff can take up so much room. But with this, you can bring it with you from room to room,” Knapp said.

Knapp was on hand Friday to meet with Sen. Charles E. Schumer. Schumer was visiting the hospital for a press conference on two recently expired health care initiatives. During his visit however, Schumer wanted to see the program.

During his visit, Schumer got to see the box in action thanks to nine-day-old Amelia Hermann.

Hermann, and her parents Jessica and Derek, were on hand to meet the Senator

Herman turned out to be an excellent model for the box, sleeping through his visit and large amount media present in the small room being used for the baby box distribution.

Kerry Minor can be reached at kminor@leaderherald.com.