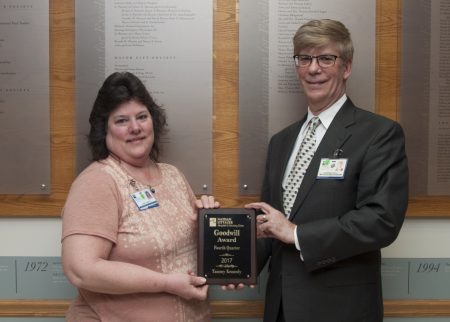 “Tammy is an outstanding employee, one that we can look up to,” said Kelly. “Her values mirror those that Littauer stand for, and that’s what got her here.”

Kennedy is a 30 year Littauer employee, hired in January 1988. She has been promoted twice to her current position. Her perpetual role of accommodation, cheerfulness and kindness, along with her signature smile, were noted in most nominations. Kelly went on to point out many of the accolades that Tammy received as a new hire 30 years ago, are mirrored by what her peers still are saying today.

“I am so very surprised,” said Kennedy. “And so very honored.”

Recipients for the award are nominated by NLH employees, providers or patients and submitted to the Goodwill Committee. They are selected in a blind format.

Kennedy received a plaque and a check along with her special honor.