The visit by Schumer, D-N.Y., was his second to the region this week. He spoke with representatives of Hamilton County, Speculator and Lake Pleasant as well as Nathan Littauer Hospital and Hudson Headwaters Health Network about local issues.

Laurence Kelly, chief executive officer at Nathan Littauer Hospital in Gloversville, and Dr. John Rugge, CEO for Hudson Headwaters Health Network, the Queensbury-based health network, spoke with Schumer about some of the difficulties of providing health care in a rural county with a low population like Hamilton County.

Rugge said there are no pharmacies within the county. For Speculator residents, the closest is in Northville, a half-hour away.

Bill Farber, Hamilton County Board of Supervisors chairman and Morehouse town supervisor, said there were more hardware stores in the county than pharmacies.

Schumer told Kelly he is co-sponsoring a bill that would increase the number of residencies for primary care doctors. Schumer said it would create about 15,000 new residencies, with half of them being general residencies.

“There is a shortage of residences,. There are interns who can’t find residencies,” Schumer said.
“That’s the kind of doctor we need in a place like this,” Kelly said. “Doing lots of things rather than a narrow specialty.”

“We need to figure out how to maintain this integrated system,” Farber said. “If you think about it, we are really a microcosm of the healthcare system.”

Rugge said not many doctors want to go out into civil practice any more.

Schumer asked about the chances of a retiring local doctor being able to find a replacement.
Kelly said he thinks Schumer understands issues the health care industry is facing and what members of his constituency are facing going forward.

Neil McGovern, Lake Pleasant’s town supervisor, said he was pleased to see Schumer making another visit to the area.

“It is always productive to have a United States senator come when there are issues [that are unique]. Most of our funding for local government are an amalgam of both state and federal [funding]. If the federal reps aren’t here and don’t touch down, they never have any scale or any idea what we are facing on that level,” McGovern said. 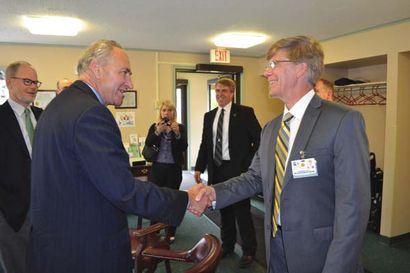