On May 21, 1891, the Gloversville Hospital Association was formed to establish a Hospital in the city of Gloversville. Later that year, local businessman, Lucius N. Littauer, offered $25,000 to build a Hospital in memory of his father, Nathan Littauer. Mr. Littauer’s act of generosity stirred the citizens of the community to contribute another $10,000 and on May 30, 1894, the original Nathan Littauer Hospital was opened on Littauer Place in Gloversville with 28 beds and a medical staff of 11. The School of Nursing opened later that year and the first birth was recorded in 1895. By 1919, the Hospital had admitted nearly 10,000 people and recorded 250 births. 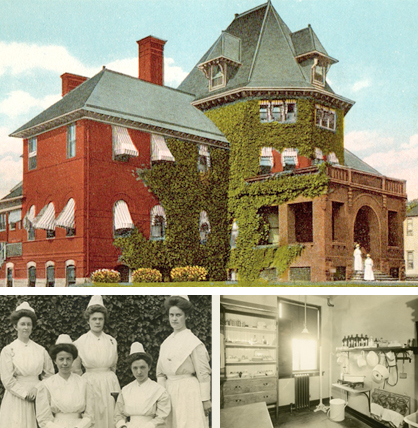 In the 1920s and 30s, greater demand for hospital services resulted in the addition of a new, 35-bed patient wing while renovations were made to the original building. An X-ray department opened and the operating and delivery rooms were renovated. The first free prenatal clinic opened, as did the Eugene Littauer Laboratory. Demand for services continued and 50 more beds were added in the 1930s. The community continued its annual tradition of donating to the Hospital.

The 1940s brought the baby boom. A 23-bed maternity unit opened because annual births jumped from 423 in 1940 to 1,066 in 1947. Admissions topped 93,000 since 1894. Post-war health and medical services were expanding, so the Hospital Board commissioned a study on how to modernize and improve the facility built by Lucius Littauer.

The 1950s began with the creation of Littauer’s own Blood Bank, allowing surgeons to perform the surgeries they previously had to send on to larger hospitals. It ended with Littauer’s first intensive care unit and the medical specialty cardiology being introduced in the community.

By the early 1960s, the Board had outlined the urgent case for a new hospital to replace the now antiquated, inefficient original building. The proposed 124-bed facility would cost $3 million and have the space to accommodate the new technologies and the highly skilled technicians to operate them. The “new” Nathan Littauer Hospital opened in September, 1968 due in part to a record $1 million donated by the community! Sadly, the School of Nursing graduated its last class in 1969.

The 1970s saw a growth on the Hospital campus with the addition of a skilled nursing facility and a medical arts/physician office building.

By the 1980s, Littauer was again bursting at the seams. Too few doctors resulted in more than 33,000 people per year using the Emergency Department, 10,000 of which were simply seeking routine care. A more spacious Emergency Department opened in 1983, along with the renovation of rehabilitative medicine, respiratory/cardio/pulmonary care, and a state-of-the-art critical care unit. The pavillion housing the Emergency Department and the critical care unit was named for Harry Starr, President of the Lucius Littauer Foundation and benefactor of Nathan Littauer Hospital. Responding to the need for more doctors and a greater accessibility to health care, our first outpatient, primary care center was approved by the New York State Department of Health. With the cost of health care rising, the Nathan Littauer Foundation was established to assist the Hospital in raising money for advanced technologies and services. The community responded by donating $1.7 million. At decades end, HealthLink opened to provide free or low-cost health and wellness services.

The 1990s celebrated Nathan Littauer Hospital’s 100th year. Responding to community needs, we partnered with the Chamber of Commerce to provide occupational medicine services to local companies. The Sleep Disorders Center opened in 1997. Our first family-centered birthing rooms, with hydrotherapy tubs, opened in 1996. But it was the growing need for primary care/physician services that defined this decade as Littauer opened outpatient centers in Gloversville, Johnstown, Mayfield, and Speculator, offering adult medicine, pediatrics, OB/GYN, general surgery, and occupational medicine. 30,000 visits were made annually.

So far in the 21st century, Littauer has opened a new surgical center (for which the community donated over $4 million); opened additional primary care centers in Gloversville, Caroga Lake, Perth and two more in Johnstown along with additional specialists in urology, orthopedics, family medicine, and neurology. In 2007, the five-year, $16 million Littauer Campaign and Strategic Plan for Excellence commenced to improve Littauer’s technology, computerization, and facilities. Fundraising brought over $4 million in community donations. The Radiology Department became fully digitalized with the acquisition of the high-speed, 64-slice CT scanner, a nuclear medicine camera, ultrasound machines and a new mammography system. Millions of dollars were invested in equipment for virtually every department including significant acquisitions in the operating room. The 41-year-old maternity unit was renovated in 2009, and the expansion and renovation of the 27-year-old Emergency Department was completed in 2010. More recently, the third floor patient rooms were upgraded. Significant renovations were made to the Diagnostic Imaging Department, pediatrics, and many support areas. This Campaign for Excellence furthered Littauer’s commitment to shape the finest health care team, to secure the best equipment, to deliver the best health care in the most up to date facilities.

Nathan Littauer Hospital and Nursing Home, our network of 9 outpatient primary/specialty care centers, our education and wellness center and our new outpatient surgery center in Johnstown serve this tri-county area of over 100,000 people. More than 230 physicians and providers in 30 specialties are on Littauer’s medical staff. We are the second largest employer in Fulton County with nearly a thousand nurses, technicians, office personnel, and support staff. The hospital is looking forward to continue expanding the services it provides by bringing a kidney dialysis service to the area, as well as a primary/specialty care center to the town of Fonda.