Thank you Fulton Montgomery Regional Chamber of Commerce for this award!

Here’s what our media partner The Leader Herald had to say about the event: 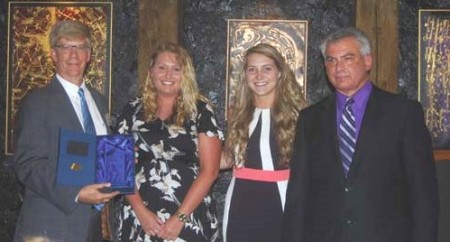 MAYFIELD — Talking about the HFM BOCES PTECH program, Fulton Montgomery Regional Chamber of Commerce President Mark Kilmer said he still gets choked up when he talks about his first encounter with one of its students.

Kilmer said many people forget that part of the grant funding for the initial creation of the project-based learning high school called PTECH required the school, which also gives college credits, to bring in some “at-risk” students for its initial 50-member class during the 2014-15 school year. He said he remembers interacting with one student who had trouble speaking to him during a business-style mixer event. He said the student, unfamiliar with speaking to adults in that kind of environment broke down and had trouble finishing his sentences when he tried to go through a scripted interaction.

“They weren’t your typical students, some of them might not have made it through the 10th or 11th grade, and I’m not ashamed to say that because what they showed in the first year was astounding,” Kilmer said. “I saw that same gentleman a few months later and he talked like a pro, a truly young professional.”

Kilmer said the New York state commissioner of education, John King, was visiting because the school is a model for a new way of teaching students who may fall through the cracks otherwise.

“I still remember this one guy who couldn’t talk to me in the courtyard three months earlier when King asked if there were any questions, he held his hand up high three times and stood up and asked the most articulate questions I’d ever seen asked,” Kilmer said.

Kilmer was the master of ceremonies Thursday night at the first HFM Business Education Partnership’s awards, an event sponsored by the chamber and held at the Paul Nigra Center for Creative Arts.

HFM BOCES Superintendent Patrick Michel said the awards dinner Thursday was aimed at honoring the 60 local businesses that partner with PTECH. He said the businesses are involved in the program every day, providing real world business problems that students work on as projects as they learn the curriculum. Michel said students have helped businesses make money, like helping to monetize Mohawk Cabinet’s website by listing product prices and enabling a new revenue stream for the company.

Two awards were given at the event, Shawn Czadzeck, a “communications augmenter” for Townsend Leather, received the HFM Business Professional of the Year for his work with PTECH students. Nathan Littauer Hospital was awarded HFM Business Partner of the Year, for its participation in HFM BOCES “New Visions Health Careers” program.

Nicole Walrath, the chamber’s business and education partnership coordinator who works closely with the PTECH program, presented Czadzeck with his award. She said Czadzeck helped students engage in their passions.

“During this past academic year, Shawn participated in all four of the Third Thursday Professional Series sessions at PTECH. The Third Thursday Professional Series events connect students with business people in an informal, group setting, to help students develop their soft skills,” she said. “This year’s subjects for discussion were developing a resume, interview skills, professional presence and dress on the job, and effective communication on the job.”

Walrath said Czadzeck helped the students by gathering them into a “casual circle to ensure every student was a part of the conversation.”

“Listening to Shawn’s interactions with these students, it’s clear his demeanor puts students at ease, as they all chime in and eagerly seek his feedback on the topics,” she said. “As a mentor, Shawn not only kept the online conversations going with his mentee, sophomore Daniel Waldron, through the online MentorPlace program, he also took time to meet face-to-face with Daniel during events at PTECH including this year’s Mentor/Mentee Holiday Breakfast.”

Czadzeck said he felt honored to receive the award.

“I feel like I’ve learned a lot from it myself,” he said. “For me it was really about helping the students tap into the knowledge they already had. Most of the kids, I think, know how to be in the world, they just need someone to draw it out of them.”

Kelly Montanye, the chamber’s strategic partnership coordinator, presented Nathan Littauer Hospital President and CEO Larry Kelly with the Business Partner of the Year award. She said Erika Bucenec, an instructor in the New Visions Health Careers program, nominated the hospital. She said Bucenec just completed her fourth year teaching the New Visions Health Careers program which offers an immersion-based approach to education that allows students to explore a variety of health care careers. The classroom for this program is located on-site at Nathan Littauer Hospital in Gloversville and the New Visions students participate in clinical rotations at the hospital four days per week throughout the entire school year.

“The New Visions program has experienced tremendous growth over the past few years. In 2014, the program graduated 12 students. Last month, we graduated 36 students. Littauer’s CEO Larry Kelly was extremely receptive to the students learning in the hospital and accommodated the increased enrollment by allowing the program to expand to two sessions,” Montanye said. “Mr. Kelly helped the program to increase the number of clinical rotations from nine to 20 different departments. Students are afforded the opportunity to observe medical professionals in many areas of the hospital such as the emergency department, special care unit, maternity, operating room, physical therapy, laboratory, diagnostic and radiology, respiratory therapy, nursing home, and more.”

“When you can transfer passion to high school kids, you then open up their whole life maybe,” he said. “The kids just love it, and they feel that passion from [Bucenec] and from the employees of the hospital.”