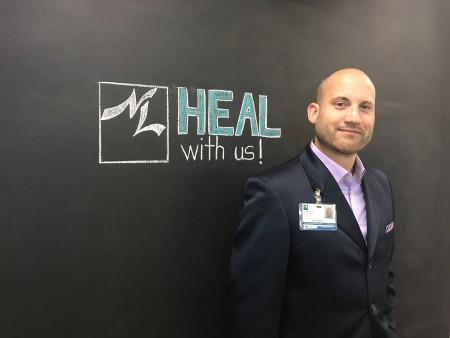 Performance improvement specialists are employed primarily in the healthcare field to improve patient care in a variety of ways. At Littauer, McFee serves as a consultant to staff and administration, evaluating, planning, and implementing improvements in healthcare. Other aspects of his job include team building and group facilitation, compiling and tracking data, and preparing training materials.

In has set up a task force to address sepsis and to lead the nation in sepsis education. McFee is working as the project lead for sepsis education at Littauer. Sepsis is the result of a massive immune response to bacterial infection that gets into the blood. It often leads to organ failure or injury

It is McFee’s goal to bring awareness and education to the forefront of all Littauer staff. He also works closely with individual departments supplying them with information and tools to improve patient outcomes.

“In the brief time that Wes has been working here, he has been quick to add value by using his strong problem-solving, analytical, communication and teamwork skills. We are delighted to have him on our team,” said Goldberg.

“As a numbers guy, using data and statistics for practical insight is what I enjoy, and I’m right at home at Littauer’s Performance Improvement department,” adds McFee. “My background is largely in project management and I’m fortunate to share that with my colleagues, as well.”

Interestingly, June 2017 was not McFee’s first interaction with Littauer. In 2000, while at Littauer, he was diagnosed with a severe mitral valve prolapse at age 33. Mitral valve prolapse is a condition in which the two valve flaps of the heart do not close smoothly or evenly, but instead bulge (prolapse) upward into the left atrium.

Dr. Michael Holmes of Schenectady Cardiology Associates gave McFee a prognosis of two weeks during surgical consult. McFee claims he would not be alive today without the condition being correctly diagnosed at Littauer.

McFee had open-heart surgery immediately thereafter, was found to have an extremely rare bleeding disorder known as Glanzmann’s Thrombasthenia, which caused post-op complications while at Albany Medical Center. He was later seen at Johns Hopkins University Hospital by Dr. Harry Dietz, the world’s leading expert in connective tissue disorders and after whom Loeys-Dietz Disorder is named. McFee was soon diagnosed with a connective tissue disorder not yet identified by medical science, and his DNA remains as a research specimen at Hopkins.

Fast-forward to 2017, McFee together with his wife Tabatha, a Special Education Teacher at Mayfield Elementary School, Co-Advisor of Mayfield Elementary School Running Club, created a 12-person team of locals to run the Reebok Ragnar Adirondacks Relay Race where each runner completed three different legs of the 196.2 mile course through the Adirondack Mountains over two days and one night; each runner totaled 11-24 miles during the event depending on which legs they ran.

Open-heart surgery survivor Wes McFee was the Team Captain of the team appropriately named “Heart & Sole,” who finished with flying colors and an amazing sense of accomplishment.

“Littauer was thrilled for Wes when he was able to compete in Ragnar” said Littauer VP of Marketing/Communications Cheryl McGrattan. “We were stunned when he finished so strongly. Undoubtedly his professional and personal experience will benefit our patients.”

Littauer welcomes the education and experience McFee brings to this community hospital.